How To Setup Your First Campaign For B2B Leads On LinkedIn?

Before you consider being proactive for B2B leads on LinkedIn, you need to do almost like an internal audit. Because that’s one thing that I see a lot of companies not do and because they didn’t take inventory and be smart about what they’re going to do, their strategies flop. So even when we’re doing a sales meeting, I need to vet companies.

And so I’ll kind of give you some of the under the hood stuff of what we’re looking for, because that tells me if you’re even ready to do LinkedIn, and again, there are lots of different ways.There’s a lot of ways that you can make money on LinkedIn, a lot of different strategies that can genuinely work.

You can do tons of content marketing, you can do paid ads, you can do direct, one on one prospecting. Our wheelhouse is to find your target audience, the individuals who work at the accounts that you want to sell to, and then surround yourself with as many of those people as possible, get those individual decision makers who work at the companies they want to sell to get them to know you, like you and most importantly trust you.

As their companies move through the sales cycle, when they’re ready to buy, you are the person that they know, like and trust. That’s kind of the framework for what we’re doing. There’s a hidden time that I don’t hear a lot of people talking about when they’re doing direct prospecting on LinkedIn, or the hidden costs, the hidden cost is time.

I wouldn’t pay for premium, I don’t think premium is worth the cost, spend 20 bucks more a month and get Sales Navigator. It’s a totally different platform, targeting is way better: lots of reasons there. But the hidden cost is time, even though Sales nav. is cheap.

For B2B leads, if you’re doing anything like Google Ads, that’s going to be expensive. Sales Navigator is cheap, $80 a month: that’s like 10 clicks on Google Ads. But the hidden cost is time because people aren’t aware of that hidden cost with time, that’s what really ends up stinging them in the butt.

Before you decide you want to pull the trigger, and contact more than one prospect on LinkedIn. What you want to do is figure out what’s my annual client value, or your lifetime claim that you have. A good rule of thumb for what we do if you’re doing the organic one on one prospecting is if it’s going to be less than $5000, if you’re doing it yourself, it might not be worth your time investment.

If you’re wanting to work with a service provider, it seems like the sweet spot is $8,000 to $10,000.  Usually, if you’re into B2B, that’s not an issue. But just something to keep in mind, especially if you’re selling something that’s a subscription, let’s say $100 a month, which is like $1200 in a year. That’s where people don’t get is like $1200 is great, but how much time you want to sink into that to get one close? Not a lot of it’s just 1200 bucks, so that’s where you need to figure out what your lifetime value is.

So people will say: “Oh, we work with companies that do this much revenue, this many headcount in this industry, in this location”, and I’m like “It’s great, but who are the people, though, that are either your cheerleaders, or the the decision makers at those companies, those are the people that you talk to that you have to talk to, you can’t send a connection request to a company, there’s no contact form on LinkedIn, it’s a two way dialogue.” 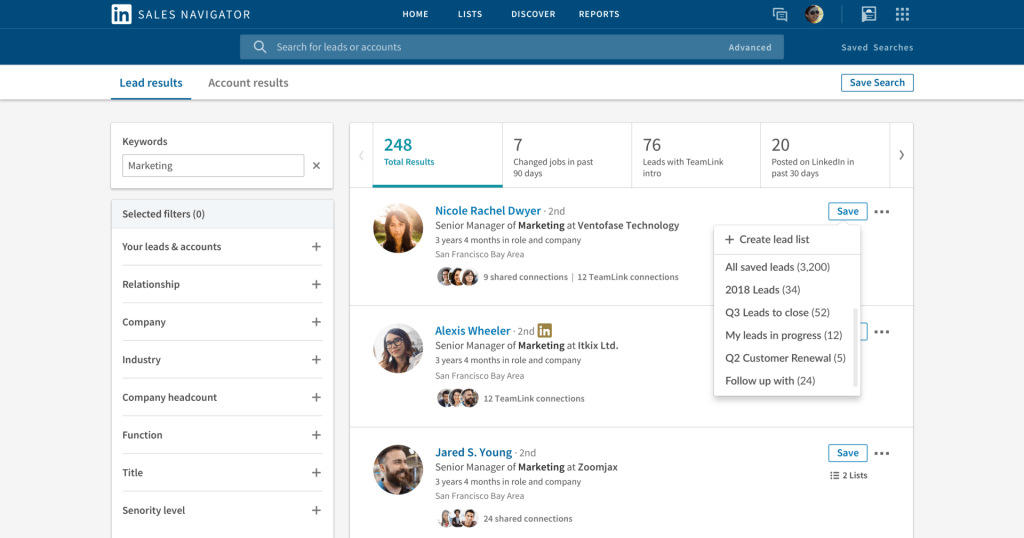 So make sure before you pull the trigger for searching for B2B leads on LinkedIn through direct prospecting, you have to know your target audience, you have to be able to find them on LinkedIn, you have to be able to know what your sales messaging is to that target audience. Otherwise, you’re just going to be wasting a lot of time, saying something that no one cares about. I always tell people too, when you first start, it’s going to suck. Don’t feel like it has to be perfect before you pull the trigger. Just get something that is structured enough to work but loose enough to change and evolve as you release it into the wild.

So annual client value, figure that out first, make sure it’s more than $5k. Make sure that you can describe your target audience, specifically the people at the accounts you want to sell to, make sure you can find them on LinkedIn and know what you should say to them.

Also is there one more thing, super critical, you’ve got to have your sales process set up. So make sure you have, please pretty please just get a CRM, I don’t care, use HubSpot Free, get something. Because if you’re using a spreadsheet, that might work up until the point where you start putting people into a funnel.

If you have 20-30 people, they get plugged in your funnel, month one, month two, that turns into 60-90. Pretty soon you’re like, this spreadsheet is not cutting it, people are falling through the cracks. So make sure that you have a CRM set up, just get something started, make sure you have your sales process ironed out, even if it’s just, what are the email templates you send when someone asks for more information, get out a piece of paper and a pen and just draw it out.

Then your cost per lead might be low, but your cost per acquisition is high, because you didn’t close very many people. That’s where I see a lot of people get hung up too. So just make sure you do those. It’s kind of just like business 101, but a lot of people are like, I want to grow my company, I just want a lead and they go to LinkedIn, and then they end up getting cynical because they wasted a bunch of time.

At What Stage Should B2B SaaS Companies Start Exploring LinkedIn as a Sales Channel?

Great question, I would say this: At every single point in your life, and the life of your company, you need to know the right people, the type of people that bring you the most value, that might change as time goes on. It’s always going to be a good idea to be surrounded with potential leads: it just is.

But you’ll find, as your company grows, and you are doing less of the sales, some people, they’ll move, usually the owner, the founder starts doing sales, and then eventually they’ll pass that roll off. So in that scenario, they’re less concerned about talking to leads because they didn’t do that. But they still want to make strategic alliances with other companies and they might want to know people that they might want to hire.

So start yesterday, start using LinkedIn yesterday, just know who is going to bring you the most value. For I’m guessing, for this podcast audience it’s going to be B2B leads on LinkedIn: so start immediately.

Isaac Anderson is a LinkedIn Industry Top 1% SSI certification meaning. Meaning he is an all LinkedIn Expert. Including marketing, consulting, conversion optimization, and business strategy. He’s currently the CEO of Zeeko, a platform that uses LinkedIn to create real, meaningful relationships between clients and customers so that B2B SaaS companies can generate high quality B2B leads on LinkedIn and can improve their ROI.

He is also a LinkedIn instructor and educator at Data Driven U, an online training program platform for people who want to master the skills of digital marketing, where he has a great video course: “LinkedIn Jumpstart”: to teach other business owners how to use LinkedIn to do market research and create relationship-driven leads.

Check out the full podcast interview with Isaac Anderson on SaaS District here.

How to Generate Quality B2B Leads On LinkedIn?

How To Setup Your First Campaign For B2B Leads On LinkedIn? Before you consider being proactive for B2B leads on LinkedIn, you need to do almost […]
Do you like it?2
Read more